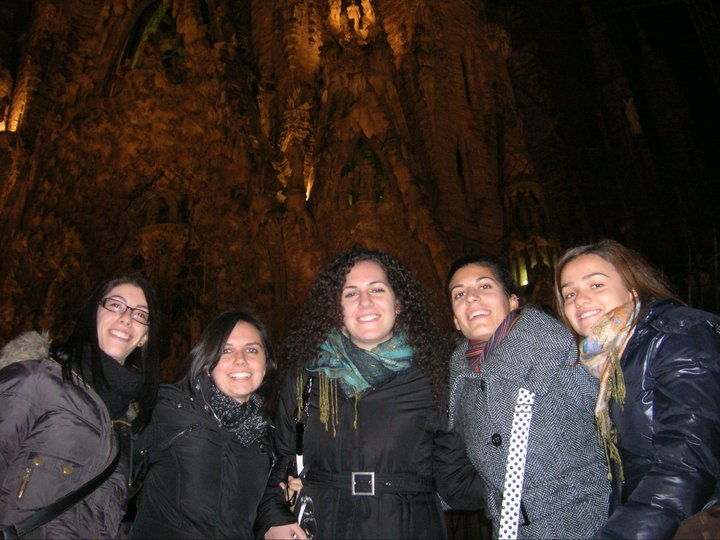 Five friends and their common love for Spain. Five friends and a plan: spending a cheap and easy holiday in Barcelona. Rome-Barcelona and return, in just one day. 24 hours to visit the city and taste its way of life. No luggage nor backpack, only our handbags and what is essential to live a day as tourist in a foreign country.
It was the 27th of November 2010 and our flight left a sunny but cold Rome in the very early morning. Sleepy but excited, we got on board and two hours later bienvenidos a España!

Barcelona was even really cold that day, but we did not realize it almost at all because we were greeted by warm sunbeams.

Smiling faces, map in hand, we planned our day and let the journey begin. It was Saturday morning and the city was really crowded. Lots of tourists along the streets and lots of Spanish as well, to whom we got closer now and then to ask some information. But asking information, most probably, was just an excuse to better hear the sound of such a nice and catching language for us. So charming, though so close to ours. Indeed, the funniest thing in a dialogue between an Italian and a Spanish is that both obstinately speak their own language, but at the end somehow they understand each other.

From road to road, everything was amazing: people, buildings, monuments. And how not to mention the streets artists attracting and entertaining passersbys who are snatched away for a moment from their stressful everyday life.

Exploring the streets of the city and visiting some shops, – of course, we were all women! -, we arrived in the square in front of the cathedral. Work in progress outside, but we decided to visited the church, an awesome gothic construction. A quick tour, as the time we had was really short and in the meanwhile the time for lunch came. Under a perfectly warm sun, we sat on a bench in the same square, to eat some sandwiches we made before leaving Italy. A really happy moment, just sharing some simple food in friendship.

But here comes the best part of this unforgettable little holiday. After lunch , the plan was to go visiting Parc Güell. As we needed to travel by underground, everyone took her wallet out to pay for the ticket. Everyone except Beatrice. When she put her hand in the bag, she realized that her wallet was gone. Lost or stolen? Trying to understand what had happened, we looked to where we already walked, but there was no sign of any.

Obviously, in the wallet, there was not only money, but even important documents as her identity card and the ticket to fly back to Rome the morning after. So, this was clearly trouble. At that moment, we were quite close to Plaça Catalunya and we went to the police station to report the theft. The result was that me and my friend Beatrice – who in the meantime became Beatriz! – spent the rest of the day in front of a black door in the police office, waiting in a small but very confused queue, while the rest of the group hung around the square waiting for us.

But the matter was not the denunciation. The real matter was that without documents nor ticket, of course, it is not possible to fly. Fortunately, there was someone in Italy who could help us, sending a copy of what we needed via fax. And here was the next challenge; to find a place to receive a fax. We thought to search for an internet point, but it seemed like nobody knew what we were talking about. In the end, actually, we discovered the reason why. It was because in Spain they called it “locutorio”. So strange for Italians, as there is something in this word that remind us of the graveyard. But five girls never lose faith. Still smiling and laughing as well at such an hilarious situation, we found the locutorio in the end and we started to enjoy the journey again, even if by that time it took a completely different trend.

The next obligatory stop was at the Sagrada Familia. We spent quite lot of time inside there, just sitting, looking around and taking pictures. Then we went to the magic fountains and it was just amazing. Water, lights and music: a perfect trio which nicely stole our attention. The beauty of these place made us forget the bad experience of the wallet and give us back all the love we had for Spain.

And the best link between different cultures is food. And what else can you eat in Spain if not paella? So traditional dinner in front of five big pens full of deliciousness. And a dinner slow as never before, in order to spend as many time as it was possible inside the restaurant, as we didn’t have even an hostel.

After dinner, the plan was to find a place where to spend the night. Walking on la Rambla, the best solution came to us. Just 15 euro for a pub and a disco. Two places to meet people, have fun and, last but not least, stay under a roof! We got it and from a drink to a dance the night went by .

In the early morning we reached the airport by bus. Almost one hour, one hour of deep sleep that continued then on the chairs of the airport, waiting for our plane to come.

We arrived in Rome in the early afternoon. It was raining a lot and we were more tired than ever before, but it was a lovely tiredness. Back home, a shower to re-establish the human appearance and smell and collapse on a comfortable bed like little Ulysses that reached Ithaca, after an incredible and amazing trip.