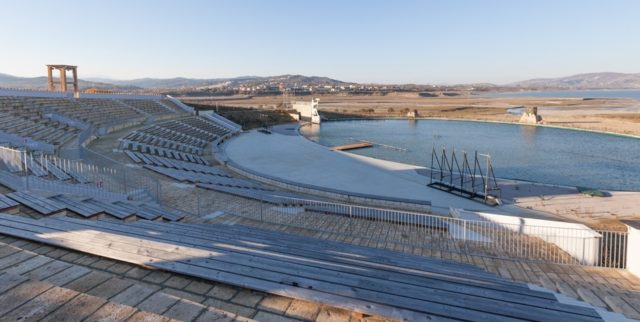 Tuesday, August 22, 2017 at 8.30 pm in the Arena Sinni – Great Attractor of Senise (Italy) will take place the VI edition of “La Notte Veste Senise”.
The resort is located in the heart of the largest protected Italian area, the Pollino National Park, in the valley of the Sinni river. In its territory insists the ancient village, of Norman origin, develops at the foot of the medieval castle and is an inextricable labyrinth of lanes, ancient houses, and alleys decorated with precious and crisp purple necklaces left to sunlight on the balconies: “Peperoni Cruschi”.
The lucane delicacy now known throughout the world, and the dam of Monte Cutugno, the largest artificial invasion of Europe and one of the creeks of this water-sparkling water that rises the Arena Sinni, a 4000 square-meter scenic space wood and tuff with a plate overlooking the lake’s waters that can accommodate up to 2500 viewers.

In this place the Sinni Arena, far from everything, silent and wild, so loaded with emotions to become part of the story told by the actors, which until September 9 goes on stage the show “Magna Grecia. The myth of origins” whose artistic direction is entrusted to the famous director Emir Kusturica. What is seen in Senise for the second year is a spectacle that tells an engaging and plain language one of the most important stories of Basilicata: those related to its origins rooted in Greek culture.

The event, produced by Cool Events by Pasquale Guidi, has now consolidated its reputation as organizer of great fashion events, not least the one held in Rome, in the splendid setting of Piazza Navona as well as having a twenty – Designing and organizing Events at Corporate Conventions and Policies, Congresses, Meetings, sees the patronage of the Municipality of Senise, of the APT Basilicata and of the GAL “La Cittadella del Sapere”.

The transparent water-lined plexiglass walkway will make it possible to see the models crossing the lake by walking on the water, with the backdrop of the show on Magna Grecia, which will skirt the dresses of international designers Gianni Calignano, Franco Ciambella, Giada Curti, Michele Miglionico, Koscanyo and the Pansardi Bridal

Guests of the evocative event are the well-known songwriter Pierdavide Carone who attends the Friends of Maria De Filippi, the singer of The Voice of Italy Timothy Cavicchini, the performance of the “Circo Bianco” in a circus dance and dance, will also be present Tommaso Filieri with her beautiful clothes natural floral compositions of the Botticelli style.

The scenery is entrusted to Mario Carlo Garrambone, choreography and direction at Matteo Giua, make up and hair styling by the European Academy of Policoro and Matera, created and managed by Mirella D’Alessandro, photographs by Gigi Samueli.

Particular attention will be given to the social purpose of the event: the awareness campaign on autism involving the involvement of the “ALA Lucana Autism Association”.